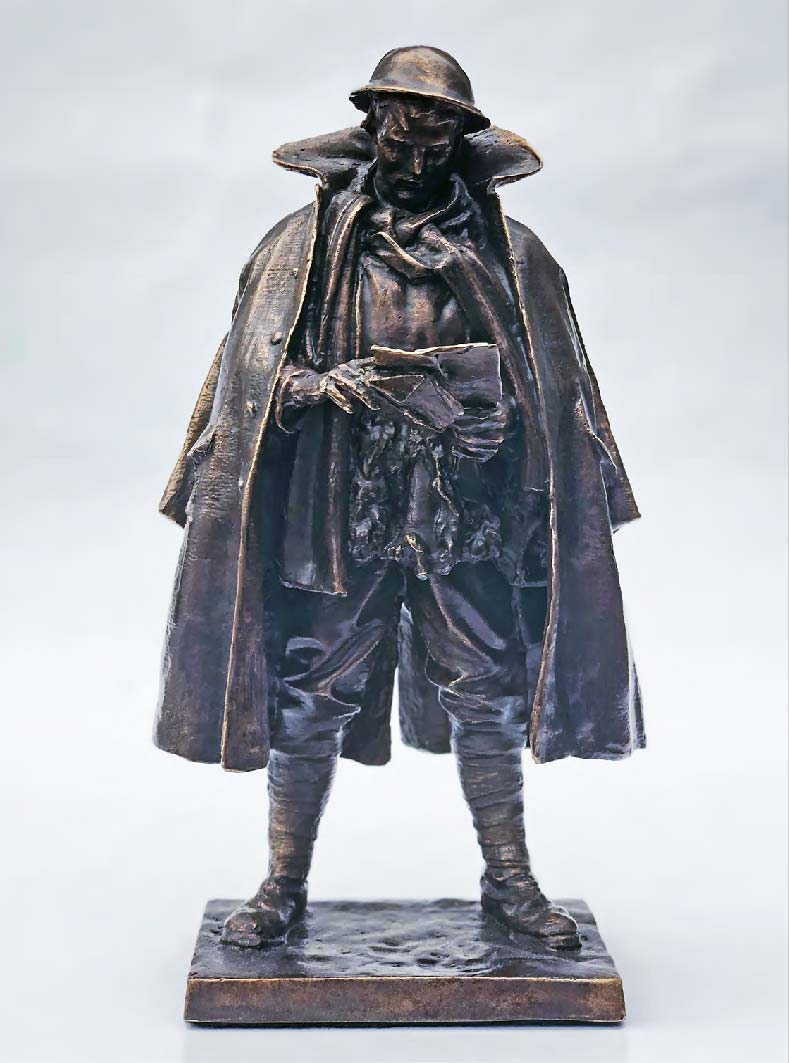 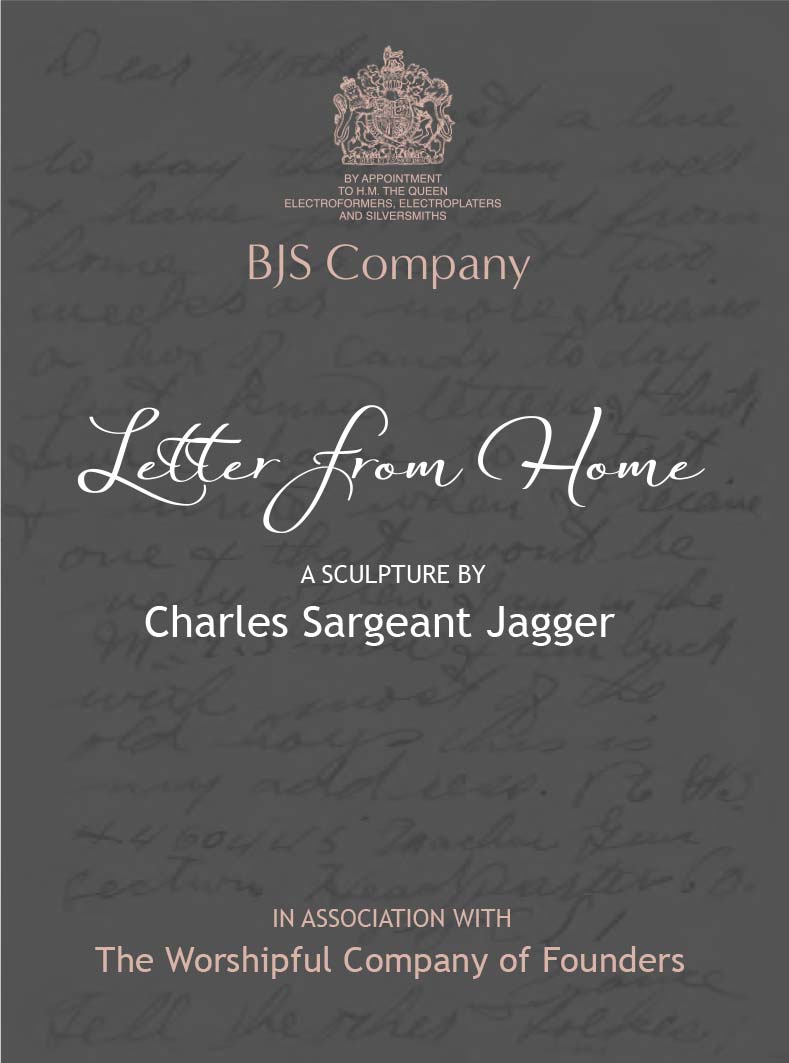 One of the few good things to come out of social isolation and the pandemic has been Zoom and FaceTime, allowing us to keep in touch with loved ones at home and abroad.

Just over 100 years ago on the Western Front in World War I, a letter from home was the only way to connect with your family and friends back home, and to try and bring some joy and good news into an otherwise bleak existence.

The Court of the Worshipful Company of Founders has decided to offer you an exclusive opportunity to own a wonderfully cast and patinated, 30% sized, accurate version of the maquette, Letter from Home, a truly beautiful and poignant piece of sculpture in the Founders' sculpture collection.

Castings are at the very heart of the company's existence, and this seems to be the perfect way to share the beauty of this incredible piece of sculpture with you.

Commissioned by the Great Western Railway to commemorate the railwaymen who had served during World War I. Letter from Home was created by the renowned sculptor, Charles Sargeant Jagger, and installed in 1922 on Platform One, Paddington Station, London.

Letter from Home was described as a realistic bronze statue of a British First World War soldier dressed in battle gear, wearing a helmet, woollen scarf, and a great coat draped over his shoulders. The soldier is looking down whilst reading a letter from home.

Jagger left school aged fourteen and was apprenticed part time to Mappin & Webb as a silver engraver, studying art the rest of the week. This applied arts and craft grounding led towards him achieving his goal of becoming a sculptor. During his time at Sheffield Technical School of Art, (1899-1908), he consistently won awards, which culminated in his appointment as Master for Metal Engraving at the age of eighteen. A scholarship to study sculpture at the Royal College of Art in London followed within a year.

On completing his studies in London, he won a further scholarship to study at the British School at Rome, which he immediately relinquished at the outbreak of the war in July 1914. He enlisted with the Artist's Rifles and was commissioned into the Worcester Regiment. He witnessed the absolute hell of war, being shot through the shoulder at Gallipoli (1915) and later gassed in the trenches and wounded again in Flanders (1918). For his gallantry he was awarded the Military Cross. In the final months of the war, he was appointed as an Official War Artist by the Ministry of Information. War proved to be the making of him as a sculptor, his first-hand experiences fuelled his art and he quickly established himself as the premier British sculptor of his era. Most of the 1920's were spent addressing the never-ending demand for war memorials across the nation, Europe and beyond. A series of high profile commissions culminated in his masterpiece, the Royal Artillery Memorial (1925) located at Hyde Park Corner, London. He was elected an Associate of the Royal Academy of Arts (1926), Fellow of the Royal Society of British Sculptors (1923), winning their Gold Medal twice (1926 & 1933). Notable private commissions followed; however, this success came at a heavy price. Being a workaholic, his relentless work rate and old war wounds contributed towards his untimely death in 1934. A comprehensive memorial exhibition was arranged by a group of his patrons,
the exhibition 'Charles Sargeant Jagger - War & Peace' was arranged for London alone, but such was the demand it toured Britain until 1937. 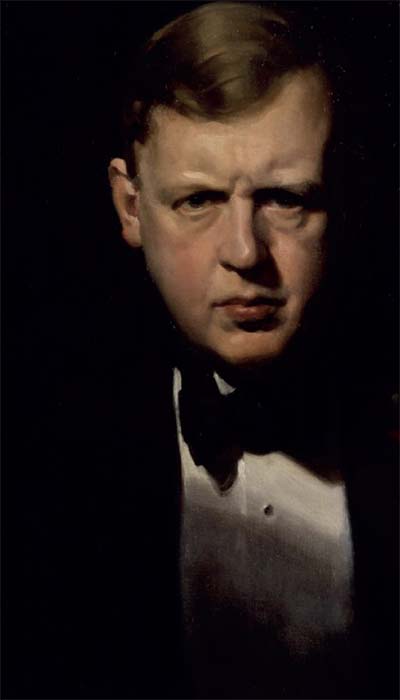 Not a lot is known about how the maquette came to us, but the following is taken from the minutes of the Election Day Court held on 22nd September 1969:

Mr Harvey Young (Master 1966) asked whether the Company would accept from Mrs Jagger Clarke, the model from which the statue of a soldier reading a letter from home which stands outside the Royal waiting room at Paddington Station and which had been executed by her late husband.

This generous gift was unanimously accepted. 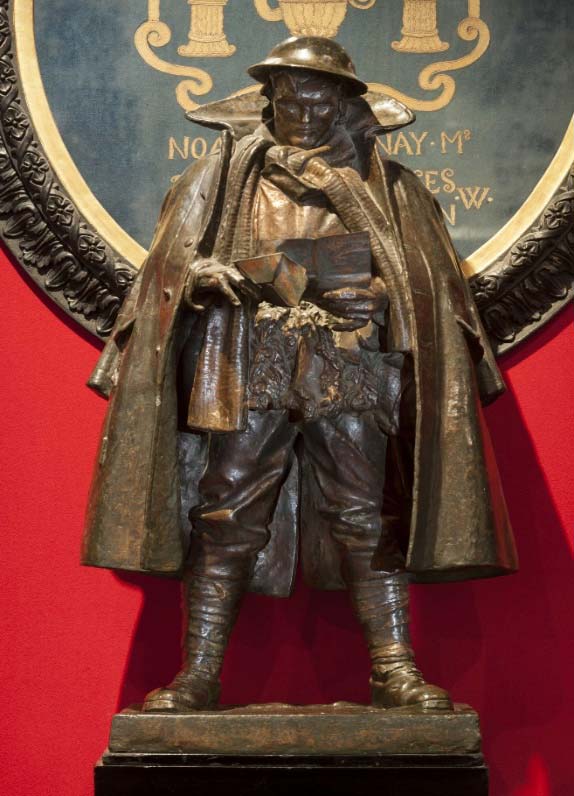 To ensure that we maintained the complete integrity of the original maquette, the help of the Royal College of Art was enlisted to accurately laser scan and digitise the sculpture.

On Monday, 7 December 2020, a small team of technicians lead by Karleung Wai, went to Founders Hall to laser scan the maquette. Expertly scanned, the laser picked up minute detail lost to the eye by the dark patination. With a digitised 3-dimensional image the size was adjusted downward. Both 25% and 30% sizes were considered, and finally it was agreed to go for the larger scale edition. 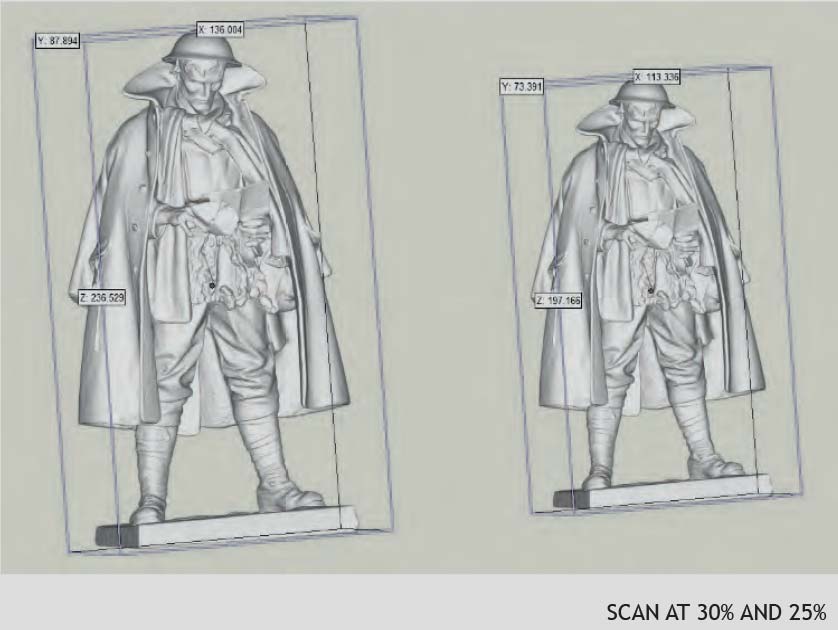 "The results are truly astonishing, with even the texture of the fabric and buttons perfectly printed on the master pattern"
Richard Lewis, Liveryman & CEO of BJS

BJS took the digital file from the Royal College of Art and 3D printed it on their Creality CR20 Pro which uses a computer that instead of printing ink onto paper, melts a very fine plastic filament of Polylactic (PLA) in 0.1mm steps. The nozzle lifts after every layer has been printed.
One hand and the letter were printed separately, to simplify mould making, and took just 4 hours to print, whilst the main master pattern required 4 days to ensure that all the scanned details were accurately depicted. 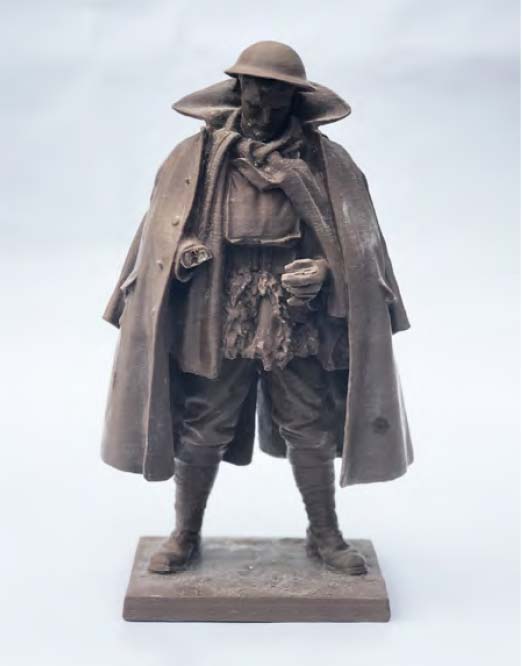 Waxes are poured into the void left by the master pattern and once cooled, the wax goes from liquid to hard wax. The moulds are opened, and the wax castings taken out. All flash lines are removed, and the casting marks added together with the Founders’ lava lamp to prove the casting is an approved piece of art from the Company’s collection. The wax hand and book are attached to the soldier along with several wax rods.  Some of the rods will provide channels through which the molten metal will be cast, and some to act as vent tubes for the air to come out when the molten metal is poured in 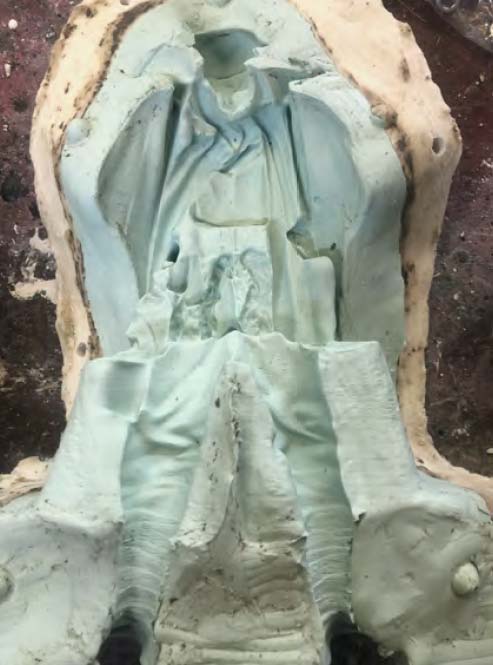 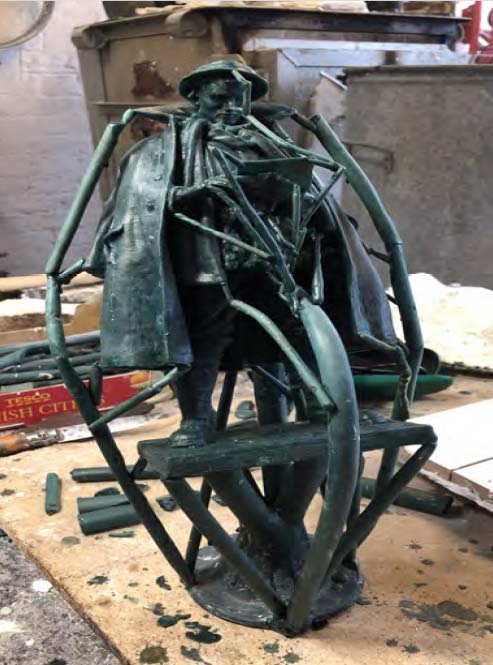 The unified waxes are now dipped into a very fine ceramic slurry in this first step, also called a prime coat, to preserve fine details from the mould. A coarser material called Stuccoing is then applied
by hand.

When the layers have been built up, the piece is allowed to dry and heated in an oven to melt the wax out and allow the investment material to form into a hard, heat resistant ceramic shell. 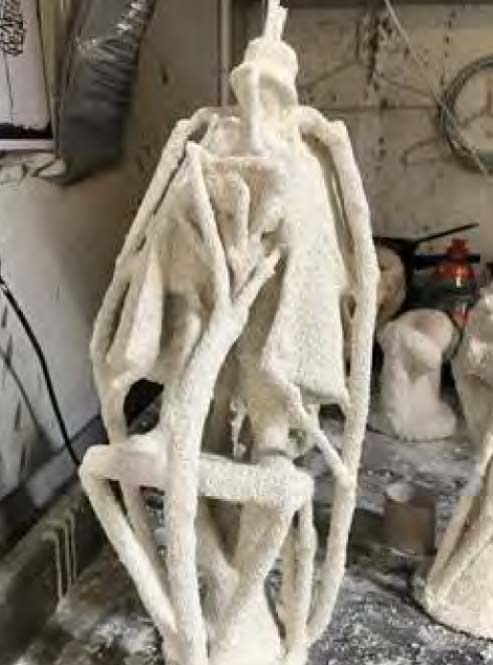 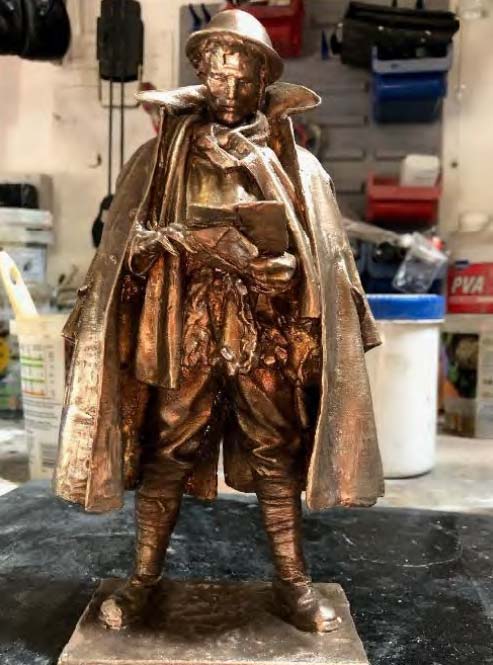 The casting is then polished and patinated to match the finish of the original maquette. 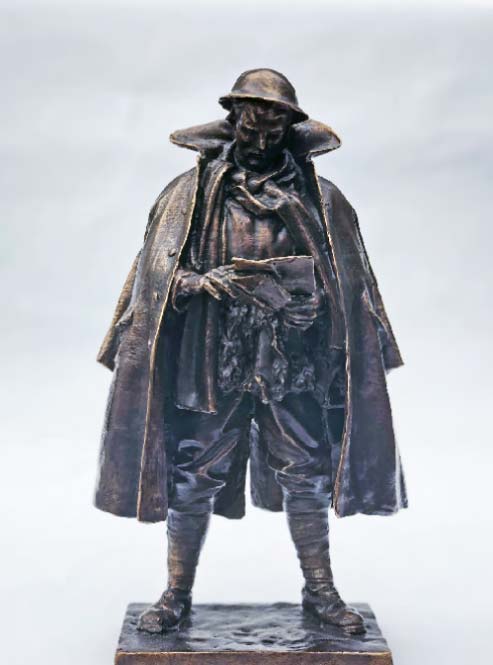 Neil Lemaire is a fine artist, born on the Isle of Man, a picturesque island in the middle of the Irish Sea, which is a centre for many Viking and Celtic myths and legends. He grew up in Douglas, the capital, a seaside town where he spent most of his childhood fishing and playing amongst the rock pools, jetties, and boats in the harbour. And so developed an affinity with water and structures around it.

Neil studied fine art, ceramics, and photography initially at the Isle of Man College and then in 1995 left the island to continue studying fine art at the Surrey Institute of Art and Design (now the University for the Creative Arts). Graduating in 1998, he worked initially for the Bronze Age Fine Art Foundry in Limehouse, London, where he further developed his ceramic shell bronze casting skills. Eventually moving to the Arch Bronze Foundry in Putney in 2004.

He now runs his own studio at the London Museum of Water and Steam, Kew Bridge, London. 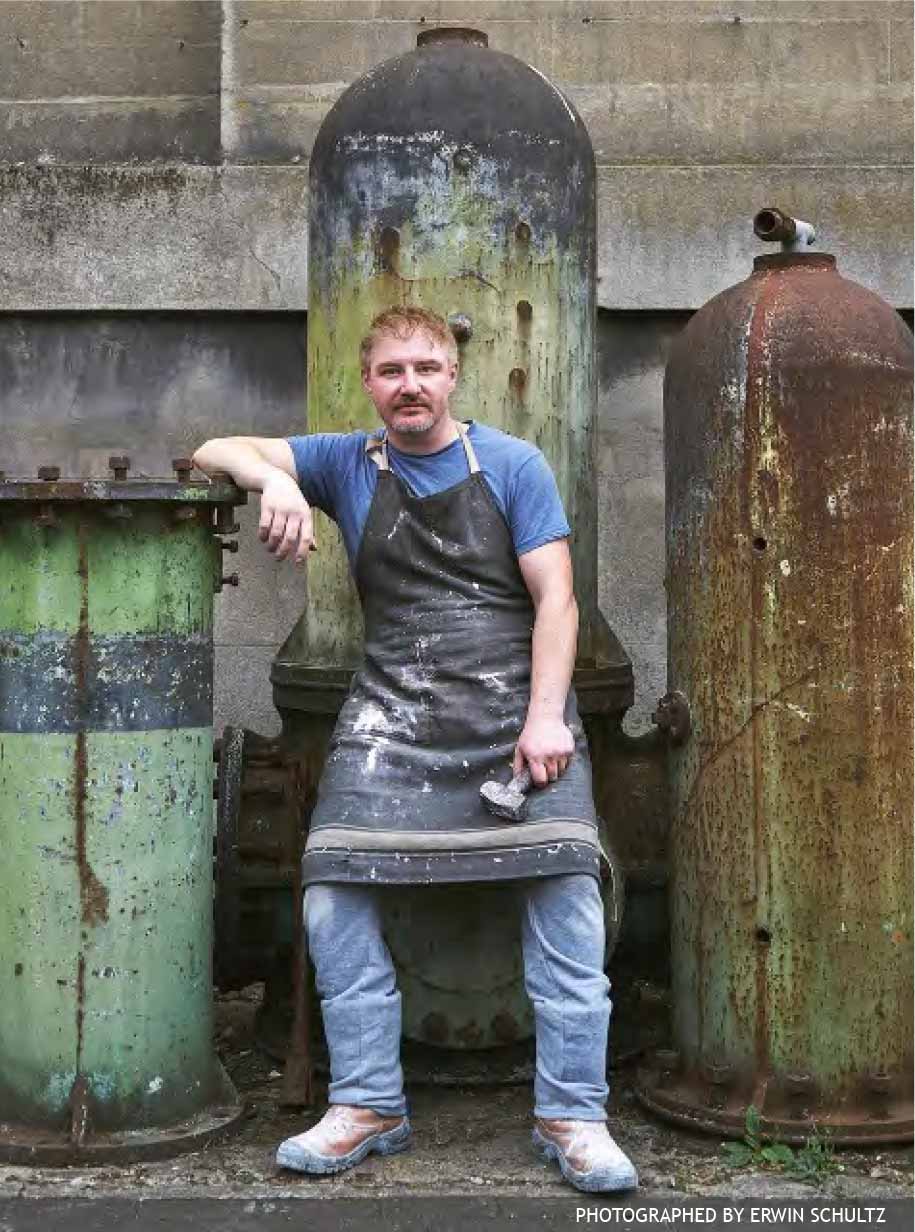 Every casting in the series has been marked discreetly on the plinth back edge with three logos, the Founder's lava pot, MM, the mark of the foundry run by the extraordinary talented artist Neil Lemaire, and with Royal Silversmith BJS's mark.

Powered by Convert Plus
ORDER NOW
We use cookies to ensure that we give you the best experience on our website. If you continue to use this site we will assume that you are happy with it.OKRead more